If you read my blog from last summer which talked about the London riots titled ‘Peckham is a real community‘, you’ll remember the photos of the ‘peace wall’. The wall of post-it notes put up by the local community sharing their thoughts on the riots and how it had affected Peckham.
The post-it notes were preserved and had been moved to the area outside of Peckham library in Peckham Square for a while but now they’ve been turned into a permanent ‘Peace Wall’. 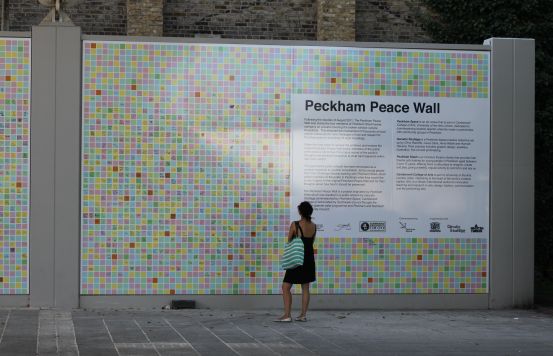 Every post-it note (ok, clearly the best have been selected) has been scanned in and turned into an organised wall called the ‘Peckham Peace Wall’. It was such a great surprise to come across the wall and be able to read the messages properly.

You can read about the project here:
Peckham Peace Wall by Garudio Studiage celebrates the wall of post-it notes of love and respect for the area which grew on Rye Lane following the disorder of last year, and launched on the 8th August 2012 to mark this one year anniversary.

It’s amazing how a basic movement of messages has been transformed into a fantastic piece of art that brings the centre of Peckham to life.  It was even featured in Creative Review back in August.

I highly recommend going to have a look for yourself.