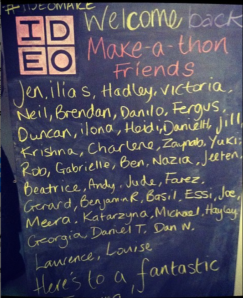 First up was Brendan Dawes talking about Popa, the iPhone camera button. Such a heart felt journey of a fun idea to create an attachment to turn your iPhone into a cool camera.

Brendan travelled miles, experienced the power of twitter, went through highs and lows but in the end has produced an amazing Kickstarter ‘tech gadget’ as a one man band. I am now, even more than before, inspired to start a crowd funded project…My only complaint is that I want one and have to wait for the next batch 😉 @brendandawes

Then we heard from Jeremy Innes-Hopkins who had me engaged when his talk about having the opportunity to design a phone for Nokia demonstrated how a vibrating phone sounds different on different materials.  Inspired by the Nokia 7110 phone in The Matrix movie which activated at the click of a button to an opening facia, Jeremy’s prototype was a playful phone which flipped up 90 degrees when it rung. Unfortunately Nokia snubbed Jeremy’s prototype which was a silly move considering Jeremy’s design was receiving more hits (on his website) than Nokia were with their latest phone launch…! @JeremyIH

Haiyan took us through the incredible story of how she created an online Geigermap which became a phenomom in Japan. She wanted to use the uninspiring, hard to interpret data produced by the government into a visually useful and easy to use, informative map. The power of crowd sourcing proved incredible and although it needs close monitoring at times, shows that a single idea can scale and escalate beyond your initial idea. Haiyan went out to Japan and met people who now rely on her map to understand radiation levels in and around Japan. Heart warming. @Haiyan

Ben Redford intrigued us with his story of Olly and Polly finding love.

Tasked with the job of designing a tangible output for a digital input, Ben told the story of prototyping devices that produce a smell when a tweet is received. Ben showed images of excellent prototypes which consisted of Pringle crisp packets and Magic trees through to ‘at home’ injection mouldings. Demonstrating a working prototype of Polly, the bubble gum spitting robot was priceless! She turns your tweets into sweets. @bredford2

Fergus Doyle told his story while standing on a kite board. Although the story was about him teaching people how to kiteboard, the underlying message was about people’s habits. It resonates well with a previous post I wrote about how we are creatures of habit. You can assume people will do something because everyone else has done it in the past but there will always be one person who acts out of character because of a habit they are use to. In this case, Fergus found himself running fast after a new kite boarder who was used to being on a snow board and bombed off in a different direction! @junkafarian 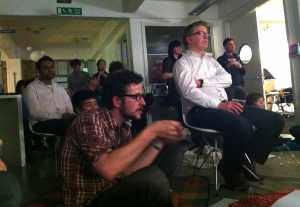 During the break we had a team challenge to build the tallest tower out of spaghetti, masking tape, string and a marshmallow on top. I heard there was a prize for the most daring tower which we, unfortunately attempted, and failed.

Tom Hulme led his talk in by reinforcing the importance of prototyping, testing, prototyping, making. Apparently MBA students will always agonise over the process and drop the marshallow on the top at the very last minute. Their average height is 20cm. While kindergarten kids will build a bit, test it and build again taking the marshmallow up and up. Their average is 30cm. This TED talk on the subject by Tom Wujec is well worth a watch.

Tom gave us all a piece of paper and tasked us to work out how you could insert an inflatable rubber ring through a small hole to fit around your heart. After a few shout outs, Tom explained how he was playing around in class one day trying to work this problem out. He came up with the answer of creating folds all the way around the ring to reduce the diameter of the ring to the size of the hole it needed to go through. From playing around in class to work out how to solve the challenge, Tom now has his name on a Coronary Heart Disease instrument patent. @thulme

Jude Pullen, the very talented cardboard engineer showed images of a dinosaur model he made as a kid and of his excellent Sponge Bob outfit for his work Christmas Party.

I have never seen cardboard used so creatively. His love for cardboard engineering was shown off when he passed around small structures he had made which demonstrated how perfect curves and unusual shapes can be created. He was inspired by the website ‘sketch a day‘ and decided to create a set of YouTube videos which shows others how to make these structures themselves. Thanks for sharing your skill with others, Jude. @Jude_Pullen

Last but not least was Charlene, the new Yorker who came to London knowing only that she wanted to do something creative. When Charlene heard the term ‘designer maker’ she felt she had found her destined job title. Then faced with the question of ‘what do you make?’ Charlene had to question herself but luckily did not give up on her love to create things. She took us through a wonderful story of playful, creative and unusual objects which she had made and will promote making at the Clerkenwell Design Week this May. Check out the lovely imagery of her making – the po-tatoe is well worth a look. @CClerkenwell

Charlene really got me thinking about what I make. My first reaction was ‘I used to make lots of things’. That was when I had space, a loyal glue gun, soldering iron and spare time. But the more I think, the more I realise I do make things, they just use different skills and are focused around different things these days. The next blog post will focus on Louise and making!  Thanks for the inspiration, Charlene, it is so valuable to question yourself from time to time.

My take-aways from the evening were –

When’s the next event?